The possibility of “programming” health disorders in people who suffered childhood stress was recognized as early as the middle of the 20th century when European scientists analyzed the condition of children who experienced the hardships and deprivations of the Second World War. However, the “negative prediction” hypothesis proposed by foreign researchers did not explain the reasons for the appearance of changes in the behavior of children who survived the siege of Leningrad or the famine in Holland in 1944-45 that were maladaptive for social interactions.

Petr Menshanov, Neuroscientist and Associate Professor at the NSU Department of Natural Sciences, together with NSU graduates, used game theory to explain the emergence and evolutionary adoption of a non-adaptive trait for modern society, such as increased anxiety, at the genetic level in people. The study was published in the specialized international journal Evolutionary Biology by Springer Nature.

In order to "program" an anxious personality, it is enough to subject the young of experimental animals to only a single exposure to moderate, mild stress. At the same time, the "programming" of behavioral disorders occurred after various factors of nature, a lack of oxygen and after stress hormones (glucocorticoids). According to scientists, the only factor guaranteeing the consolidation of such high anxiety in animals in the course of “programming” evolution could only be predators constantly hunting for them. In turn, hunger programming is only a side effect of predator pressure on resource-limited animals.

Menshanov talked about their work,

In a person, the discovered effect of anxiety programming by childhood stress is also relevant. Although two million years ago modern humans evolved to become apex predators themselves, until that time the ancestors of Homo sapiens were common food for large cats in the African savannah and forests. There is a long history of the selection of our ancestors under pressure fr om various predators. For example, in the era of dinosaurs our distant ancestors were driven into burrows by tyrannosaurs and raptors. They huddled there without light and food so they wouldn’t be eaten in their Jurassic Park. This reaction of “programming” high anxiety to early stimuli could be the factor that led to the appearance in the depths of people’s genome of a trait that was adaptive in prehistoric times but is a non-adaptive trait for modern society.

Based on their data and the results of other studies, the NSU scientists explained the high sensitivity of animals to the effects of early stress using the main tool of game theory - a graphic matrix of results. This was presented in a scientific meme with a fox, the main Novosibirsk animal, hunting rats. It describes the same relationship between anxiety and the presence of predators. 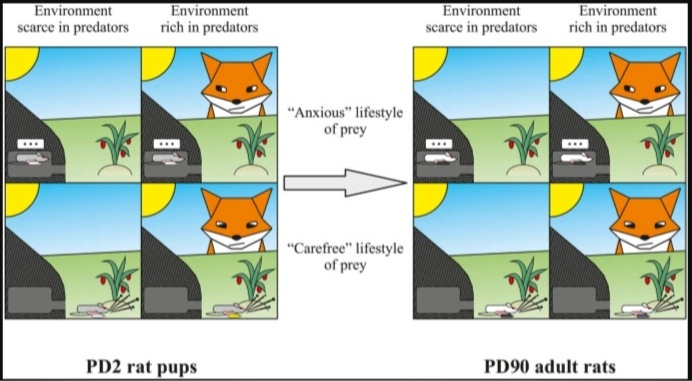 These fundamental results confirm the importance of the ability to apply mathematics for scientists in various specialties. Thanks to the knowledge of game theory, University graduates can find patterns hidden in nature even for such complex systems as biological and social. Starting this year, we will open "Digital Departments", wh ere all our students will be able to learn the basics of programming in the currently popular languages ​​Python and C ++. Knowing how to apply this knowledge, any NSU graduate will always be in demand in the modern labor market.