NSU Researcher Recognized as Among Most Highly Cited Scientists

In 2019, Svetlana Schneider, Deputy Director of the NSU Humanities Institute’s "New Archeology" Scientific and Educational Center " and Senior Researcher at the Institute of Archeology and Ethnography SB RAS, won the Russian Science Foundation grant competition for "Research by Scientific Groups Led by Young Scientists". Her project, “The Origins of the Industrial Economy in the Mountainous Part of Central Asia", was part of the President's Research Project Program. The project is dedicated to the study of a key turning point in the history of mankind, the transition from an economy based on appropriation to one based on production. It focuses on the cultural impact of this shift in Uzbekistan, Kazakhstan, Tajikistan, and Kyrgyzstan.

This year, Schneider won the Research Excellence Award Russia - 2021 recognizing her as one of the most highly cited scientists. She said the award surprised her because she didn’t know it existed adding,

This is an important step in my career and it is especially nice because it was unexpected. Of course, I am very glad that the publication activity of young scientists is getting recognition. This is a great incentive not to lower the bar, but to strive for more.

The Award was first presented in China in 2004 and has since been awarded to the most published and cited authors and organizations in Europe, Russia, Latin America, and Asia. The contribution of an individual researcher or organization to the development of science at the national and international level takes into account the number of published scientific articles, their citation in international journals, and peer review. The award is a continuation of a decade-long tradition of honoring distinguished researchers and is part of Elsevier's global initiative to support scientists.

Andrey Blinov, Deputy General Director and Head of the Russian Science Foundation Programs and Projects Department, talked about their work,

For eight years, the Russian Science Foundation has supported the best scientific projects by providing scientists with comfortable conditions to conduct their research so the effectiveness of their work is extremely important to us. The Foundation was the first in Russia to introduce an "entrance ticket", special publication requirements for the Project Head and quality characteristics in the evaluation of scientific projects. In the process of evaluation, our experts often use an analysis of the scientometric indicators of a particular scientist or research team. Moreover, we give special attention to publications in top-rated journals in the first quartile of Q1. These journals reflect high-quality international expertise and generate wide coverage, and good citation rates. 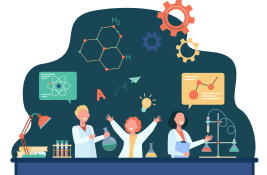